of pots and things

I brought home 3 things from the pottery studio last night... more will follow.

I am loving pottery class! Currently I'm in the studio two nights a week. I'm working on throwing larger pieces (my biggest so far is an eight-pound bowl) and also attempting to make multiples. Last night I threw a set of four bowls that are pretty close to being identical.
Posted by Wendy at 11:35 AM 3 comments:

of a girl and a tooth.

Way back when Ellie was four and a half years old, she started to think about the day when she would lose her first tooth.

You've got to understand that Ellie has always been one to plan ahead, and think about these things that will happen to her one day. She maps out her life days/weeks/years in advance. Sometimes that makes life a little difficult for her, as things don't always work out the way we have planned them.

Back in 2009, as I said, Ellie started thinking about teeth. And the tooth fairy.

This is how she saw things working out:


"When I have a wiggly tooth and it falls out,
then the tooth fairy will take away my tooth and give me a cello."

So after we all had a good laugh, we explained what would actually happen, and warned her that it might be a few years til anything happened.

So Ellie has been watching all of her friends lose teeth, and wondering impatiently when her turn would come. And at last, as all such days do, it arrived.

On Wednesday she announced with great excitement that she had a wiggly tooth. And from that moment on, that tooth was being moved continually. I don't think there was a moment, aside from when she was sleeping, that her tooth wasn't being wiggled.

And on Friday, she pulled it out.
All. by. herself. 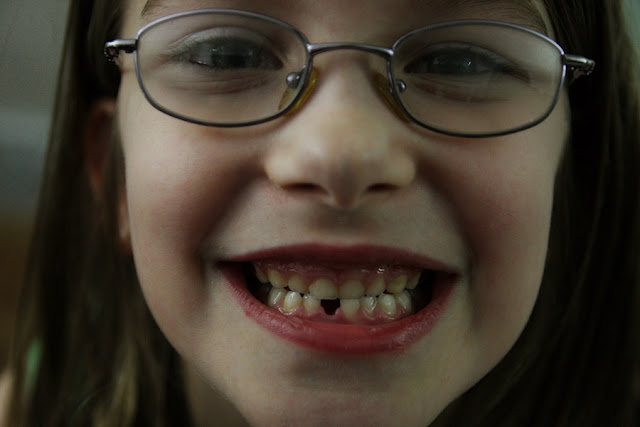 In the morning, she excitedly announced that the tooth fairy had brought her a dollar. And that she had another loose tooth.
Posted by Wendy at 9:44 PM 2 comments:

I think I'm finally back to normal...

It always takes me by surprise, how intense the last weeks are before a play production.

I managed to get all the costume sewing done with days to spare, thankfully... (pics will be coming sometime soon)... but somehow the rest of it just takes over your life for a while. I think I'm going to have to take a year off... I'm feeling my age.

And then of course, after it's all over, you pay the price. I spent three days in bed with a cold/flu/sinus infection thing that completely wiped me out.

My house is still trashed, and I'm figuring out how to get back into the groove of making dinners (Every night?? Really?), but the mountain of laundry has melted away under my careful ministrations, and I'm feeling the urge to de-clutter things and rearrange all my furniture.

Yep, back to normal, alright.

I looked through my photos of the year so far... they are exclusively knitting projects. No sunsets, no kids, no cooking successes... nothing but knitting.