I've now made my first attempt at screenprinting.

I must say, I'm not terribly impressed with the results I got.

I used this admirable tutorial and made my screen on a piece of old sheer curtain fabric. It was a bit of a nerve-wracking process, painting out the negative spaces with mod-podge and an eensy-teensy paintbrush... especially since Ellie was running around at the time, and I had to keep saying "don't bump the table!"

The screen turned out beautifully, and I used some Yudu ink for printing. I found the ink a little thick... then again, this was my first time, so I don't really know what I'm talking about, do I?!.. and the images didn't come out quite as clear as I would've liked, and I had to do quite a bit of touching up. 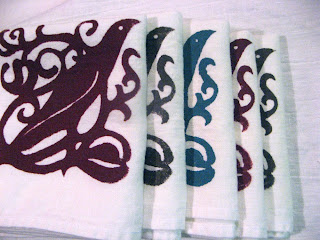 It was definitely a fun thing to try, and I'd like to make another attempt at it some time... maybe try a different brand or type of ink and see if I like it any better.

These are linen teatowels, and were made for a swap hosted by Soozs (how like me, to try out a new technique on something for other people!!!)
Posted by Wendy at 9:11 PM